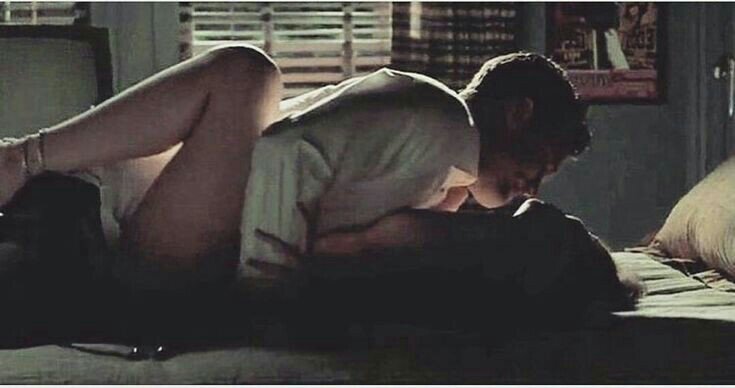 We chemically kissed. We continuously kissed as he slowly caress my body. Moving his hand down between my tights, I gasp in fear as he touch my vagina, gently rubbing it. He put his hand inside my panty searching for my whole, as he put a finger in. He pulled and push it constantly. I gasp in pleasure but trying to pull out his finger, for it was a bit painful, “Chill” he said.

He pulled it out then continued to kiss me. And all of a suddenly he stopped and gave me a lot of desire, “please, remove your panties, please.” I staked my head, he gave me a kiss on my forehead, “You scared? You don’t trust me?” I looked at him innocently. “I promise I won’t hurt you. Trust me.” “I know” I said. “Then why don’t you want to remove your panty? Or you don’t want to have sex with me??” “I do! I really do.” “Then let’s do it.” He lean in to kiss me. And I kissed him back.

I was not ready but we continued kissing. But this time I was holding my vagina so he can’t put his finger in. So as we were kissing, he realised I had my hand preventing me from his hand, he immediately stopped. Angrily turned his back on me. “I give up on you, for real” he mumbled. ” I’m done.” I tried to talk to him but no words came out. So I squad my legs then lay my head on his back. I slept.

He didn’t touch me half way through the night. But he couldn’t stand being mad at me. So ad he turned around, he placed his hand on my waist. He cuddled me through the night. I can’t lie, I had the beautiest sleep ever (if that’s a thing). I even had the best dream. I dreamt about me in a very beautiful green garden with colourful roses. I swear I didn’t want to wake up but I had no choice as the alarm. Still in his arms, he kissed my forehead.

“Wake up, you got school!!!” He Said in his sleepy voice. I lay in his chest for a while, “I will bath at 6.” I cried. He kissed my forehead again. Then he ended up kissing my neck several times. I layed still, feeling nothing but goosebumps. “Aaa wen, why you turning me down feel?” I looked at him shot,”let’s do it please.” “But u got school.” ” Aaa, if you don’t want just say it, I won’t force you hunny, haha.” He kissed me, I kissed him back. “Or maybe you just scared they will hear us?” “Yeah” ” Okay,” he kissed me again and again.

In the motion he got up and moved to the middle of the bed. Opening my legs and lay in the middle of my tights on top of me. Continuously kissing and caressing me. He mumbled something about my pussy being wet, “You feeling me right?” I nodded. He grind on me,rhythmically. He grind with his dick pressed onto my vagina. I could feel it getting hard and digging in my hole.

We had a sex on clothes moment for a while until I felt like his dick was about to get in my vagina through clothes. It was really pain as I gasp so hard. He stopped and look at me,”Are you fine?? Do you want me to stop??” I shaked my head then pull him closer to kiss him. We had the best sex on clothes ever. It was so good that all I was thinking to my self that if we were having real sex… it’ll be so great.

He got tired and lay on me. And we talked for a while until he reminded me to go bath because I have school. While I was in the shower,all I could think of was him. I made up my mind that his going to break my virginity. And my pussy was too painful and I really felt like I broke my virginity. And even today I still don’t know if I’m a virgin or not. But I know that if I want sex, his the only guy I would run too.

Reason why, his the greatest guy I know. He cares for me like no other. And he can’t get mad at me which proves he really loves me. He feels me to much and I do too. His like Christian Grey and I’m Anna Steel. He wants dick buddy with no romance but I want a man with romance. I love him so much .

🧊I Stopped Believing In Myself Because Of My Mental Health. Pain Cannot Seem To End. WHO CAN I BE WITH ALL THESE TRAUMA WEIGHING ON MY CHEST?🧊
🧊When Your Life Is A Nightmare, All You Can Do Is Fake A Smile So That People Cannot See Your Horror. -KittyMinaj🧊
🧊If I Said I'm Okay, It'll Be A Lie. I'm Struggling To Be The Person I Used To Be.( The Photogenic Insta Fashion Girl)🧊
⚫No Matter How Hopeless You Feel Don't Let It Weigh You Down. YOU ARE MUCH MORE THAN YOU CAN THINK. Regardless Of All Your Problems. Use Your Pain As A Platform.⚫
⚫When You Feel Bad About Yourself, Dress Up And Don't Forget To Wear A Smile.⚫
⚫ I Always Had A Low self-esteem And For Months Now I Couldn't Take Pictures Because I Didn't Feel Like Myself. Then I Realised That I Didn't Have To Feel Like Myself, I Just Had To Be Myself.⚫